skip to main | skip to sidebar

kido
angeles, pampanga, Philippines
i am a mascot of this fast food.. a very cute and lovable mascot in the universe!!!!!!!! 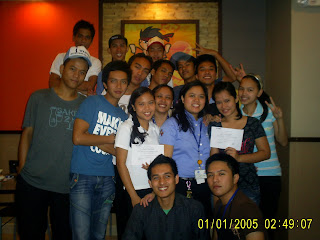 !!!we start from the top left our Dishwasher name is Cristhopher Igancio, next to him is our Headcook kuya ALAN SILVA next is RHENZ MIKEE ISIP..Dining person....next is MARK CORONEL one of our cook..wearing gray shirt next in line is GERARD PHILIPPE CORTEZ Dining person also..next was MARK LESTER CORONEL one of our cook also...next is LEO PILAO cook also.... next is JAMES PAUL ESGUERRA dining person also. next in line is GILBERT SORIANO... also one of our cook.. next stop is the girls in line.... MARIA CRISTINA QUIAMBAO...our best in SUGGESTING any dessert ..next was our beautiful and outstanding MANAGERS MISS MARY ROSE ENRIQUEZ and MISS JANE REYES wearing their both uniform... the next one is JENNIELYN ZAPANTA also one of our CASHIER...and of course the 2 last but not the least....me.... JIMSON DELOS SANTOS CREW TRAINER of KK SM CLARK, and SIR ACE LACSON INVENTORY CLERK and STOCKMAN .... this is the new batch of KARATE KID SM CITY CLARK ....BATCH 2009,... GO FOR THE GOLD ON OUR APRIL QSC AUDIT... GO KK CLARK TEAM,.,.. WE'RE HOPING THAT WE COULD GET OUR TARGET IN ALL... QSC SALES IN EVERYTHING...STAY CALM AND REMAIN STANDARD IN EVERYTHIND YOU DID... S. O. P. DIBA?????
Posted by kido at 7:31 PM 42 comments:

You do not have to be tagged to play along. This game is simple and so are the rules.

3. Tag or don’t tag, your choice, however, the more tags you create the bigger the list will grow.

4. Let me know your blog’s name and url by leaving me a comment HERE. I will add you to the master list. (If you would like a scroll box code, leave me your email address and I will email it to you.) Scroll Box Example. (I decided not to use the box for the Big Bang for ease of copying.)

5. Come back and copy the master list back to your site, often. This process will allow late-comers to get as much link benefit as the first ones in. Once you are on the master list people who have participated earlier will update their bookmarks and help everyone lower than them out on the list.

Dated march 30,2009 time around 4:00 in the afternoon....while I'm having my duty ... one of my guest ask me for a refill rice .... by the way i am working on a Japanese Jastfood restaurant where in we are serving refillable rice as well as the drinks... then suddenly i approach him that i'll just going to get some hot rice at the kitchen and wait for me to return to him to refill his rice...after i got rice at the kitchen area .. i did refill the guest whose asking for rice ...after i put one scoop of rice i ask him" SIR... OK NA PO BA YAN" then he replied at me not in a nice manner... he said "ISA LANG NILAGAY MO ANO PA MAGAGAWA KO" .....is this the proper way of answering my question.....
i just wanted to relieve my self .. thats why i wrote this one,,,,thanks if you will going to comments...
Posted by kido at 8:52 AM No comments:

vote now...nomination for the new 7 wonders of the world

The Chocolate Hills is an unusual geological formation in Bohol, Philippines. It is composed of around 1,268 perfectly cone-shaped hills, all about the same size, spread over an area of more than 50 sq km The hills are covered in green grass that turns brown during the dry season, giving them the name "Chocolate Hills." 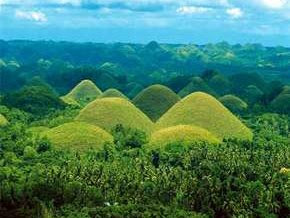 Mayon Volcano is an active volcano on the Filipino island of Luzo, 15 km northwest of Legazpi City.It is classified by volcanologists as a stratovolcano (composite volcano). Its symmetric cone was formed through alternate pyroclastic and lava flows. Mayon is the most active volcano in the country, having erupted over 47 times in the past 400 years, and is a part of what is called the Pacific Ring of Fire. 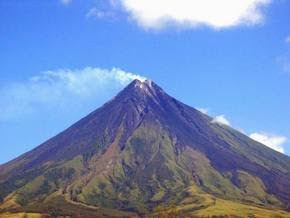 Tubbataha Reef is an atoll coral reef in the Sulu Sea that belongs to the Philippines. It is a marine sanctuary protected as Tubbataha Reef National Marine Park. The reef is composed of two atolls, North and South Reefs. Each reef has a single small islet that protrudes from the water. The atolls are separated by a deep channel 8 kilometers wide. Over one thousand species, including many that are endangered, can be found at on the reef. These include manta rays, lionfish, tortoises, clownfish and sharks. 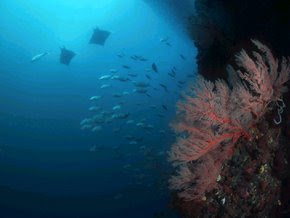 Pacquiao wins as a gentleman on the ring

The wily Mexican, shaken by a thunderclap combination, threw a dirty right cross off a clinch late in the 11th round, a foul blow that visibly saved him from a crushing onslaught.

Referee Tony Weeks called an instant halt to the most furious, suspenseful moment in the 12-round bout and slapped a point deduction against Barrera, who wisely used the break to clear his head and steady himself up.

There were no knockdowns and, although it was not the exact final outcome expected by Filipinos in the 10,000-strong crowd, the points verdict would prove inevitable after the combatants, showing respect for each other, overemphasized on defense, clean and otherwise.

Pacquiao, who fought like a true gentleman, was often on top of the action and managed to catch Barrera with hefty shots from either hand.

But the battle-scarred Mexican rode on guile and experience to make good his vow of putting up an entirely different stand from the one he had when Pacquiao stopped him in their first encounter four years ago.

By a plain look, Barrera managed to win only three rounds in the contest which he succeeded in preventing from turning into a full-scale slug-out also by warding off attacks with his left jab and repeatedly moving away from the ever-charging Pacquiao.

Judges Jerry Roth and Glenn Trowbridge scored it an identical 118-109 for Pacquiao, while Tom Schreck scored it 115-112, also for Pacquiao.

Visibly pleased with what he had achieved, if not with his desperate escape act in the 11th round, Barrera formally announced he was putting the curtains down on his 17-year ring career that saw him win titles in three divisions, a feat that has ensured him enrollment in the boxing Hall of Fame.

Barrera blamed himself for being carried away and getting caught in wild exchanges a few times, thus betraying his plan to merely finish with his pride intact.

“I should’ve not stayed in those exchanges, I should’ve boxed more,” he explained in the post-fight press conference at the media room that teemed with people, including his wife and charming kids.

“In the later rounds, my corner was telling me I have to go after him but it was very, very hard because he had such a strong defense, it was very hard to break through,” Barrera added.

Pacquiao returned the compliment and said his preparation and training helped him go the distance.

“He is still a good fighter, so I had to be careful throughout the fight,” Pacquiao explained from the podium which he shared with Barrera.

Pacquiao said he was not worried about the fight going to the scorecards.

“I tried to give people a good show and I hope people liked this fight,” he said.

Pacquiao said he was satisfied with the win, although this was not clearly the case with most Filipinos in the audience.

There was the overriding belief that Pacquiao, at his peak, would have run over the retirement-bound Barrera in their second encounter in four years.

If there was a man truly fulfilled in this fight, it was trainer Freddie Roach who was very pleased to announce that Pacquiao, after Sunday’s fight, had evolved into a well-rounded warrior.

“Manny boxed well and showed good footwork, which was what we worked at. Manny cut him off and moved him to the right, which was a beautiful thing,” he said.

While Barrera made his formal exit from the ring, Pacquiao said he was planning to move up in weight, a result of his having to wrestle frantically with the scales after he barely made the 130-lb limit for his second and last super featherweight fight with Barrera.

Before the fight, the Barrera camp had claimed it had a total of four fight plots ready for Pacquiao who, on the other hand, was given strict orders to go for an early knockout.

All these strategies did not materialize.

Of course, the greatest result of the bout was the sudden bonding that saw Pacquiao bunched with Barrera and his beautiful kids, a new-found friendship that was recorded in photographs and a mutual vow that the two excellent fighters, the bitterest of rivals, never will fight each other again. 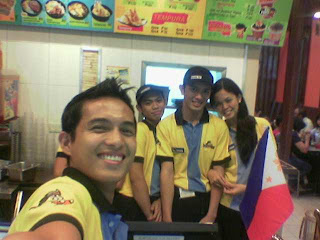 starting of ...from the left the cashier but also a dining crew.... his name is JIMSON,,,

next is the beautiful, EMJAY our dining crew ....

what is the best japnese fastfood in town?

my location of my friends....